Happy Advent to all of my friends, this is the first of two posts I am planning to make today.  If you read the post I made yesterday, you will know that every year my BFF and I exchange our own take on Advent Calendars.  She is far more inventive than me and has been known to find enough tiny presents to fit into one of those manufactured Advent Calendars, but I am an epic failure at finding gifts small enough to fit and, therefore, I have always avoided these 'ready made' calenders.

Earlier this year I saw this Advent Calendar from Love Emma and I was so taken with it.  The Advent Calendar is made from wood and the little village lights up, in addition it could be personalised with any message you chose.  I thought about and I convince myself that I could knit 24 different outfits for the two bears I made last year for my friend and these outfits would fit into the drawers.  I got very excited about the challenge and started knitting straight away.

A couple of weeks later a box arrived and I could not wait to get my first look at this Advent Calendar.  As I ripped into the box this wonderful smell of wood wafted up to me and, as I looked down, I could see the tops of the little houses and the trees.  It was a bit of a struggle getting it out but eventually there is was in front of me.  I reached down and pulled out one of the drawers.  My heart sank when I realised just how small they were and I felt such a fool when I realised that none of the things I had made were going to fit.

The drawers were approximately one inch cubed, perhaps a tiny bit larger, but not by much.  No matter how much I squished and squashed the packages they were not going to fit.  But there it was beautifully made and personalised, now what was I going to do with it? 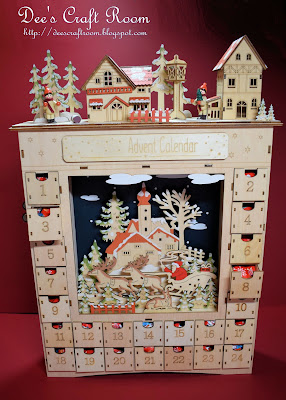 My favourite bit was definitely the little light-up village on the top, even the street lamp had a light bulb in it. 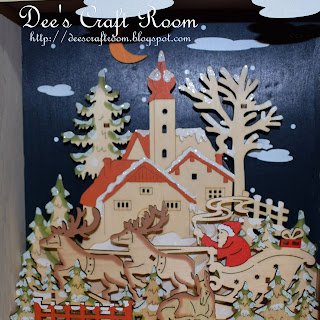 Now, I have a little story to tell you.  Some time ago my friend found an 'Elf on the Shelf' in her garden, you know those elf toys parents use to bribe their poor children into being good for the month of December.  He looked very much the worse for wear, he had lost his hat and his jumper was badly scuffed.  My friend was not sure where he had come from but she decided to give him a home and adopted him.

When I first heard about her poorly elf it went through my mind that I could perhaps make him a new hat to replace the one he had lost.  I had intended to pop it into her Advent Calendar.  Looking at the tiny drawer in my hand I thought that I might be able to get an elf hat into the drawer, so I started knitting and it fit.  I had my first tiny present sorted! 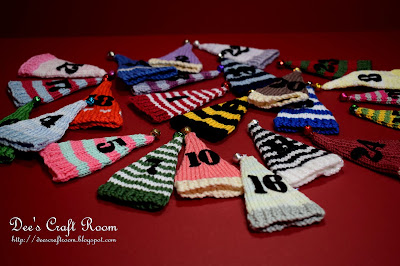 But what was I going to do for the other 23 days?  Hang on a minute, if one hat is good, how about 24 hats, a different one for every day. 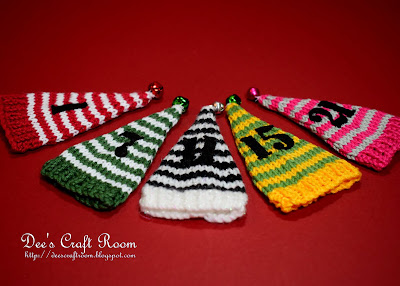 I thought that perhaps my friend could play a little game with her granddaughters and swap the hat every night, so I got my knitting needles out again. 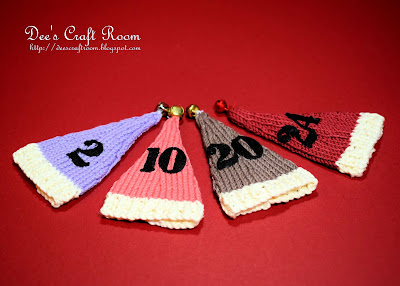 By the time I had made 24 tiny hats and stitched the jingle bells on each one I had developed this idea even further.  If I could stitch felt numbers on the hats they could count down the days left until Christmas Day. 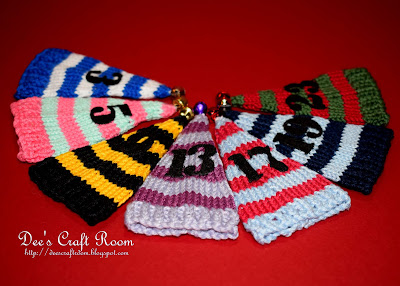 I realise that, after a day or two, there would be very little surprize left when my friend opened the wrapping paper.  However, the folded hats did not take up all of the room in the drawer, there was a little space left, only a little, but perhaps just enough. 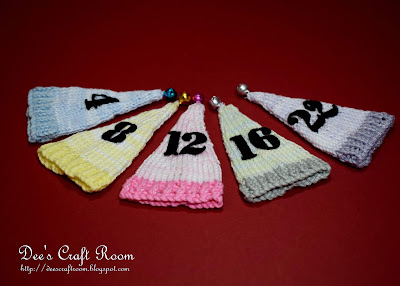 The hunt was on for some very small presents.  I popped each tiny gift inside the hat before rolling it up, wrapping it and scrunching it into the drawer. 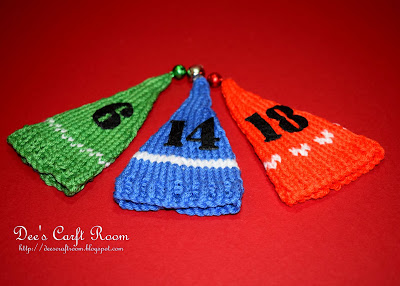 If my friend does not want to change the hat on her elf every day, I thought she might like to add a little bit of ribbon to each hat and turn them into a Christmas Tree decoration. 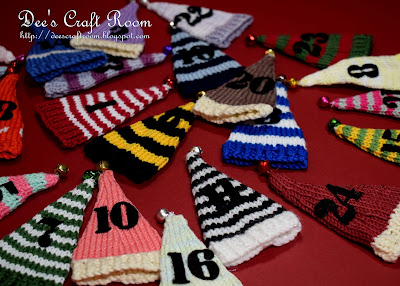 I really hope she likes my version of musical hats.

I shall be back later to share with you the contents of the parcel in her padded box.  Please join me.