Have you missed our little elves?  Well, this weekend our elves took advantage of Ryan visiting Grandma and they went to the North Pole to file another report on Ryan and his sister. 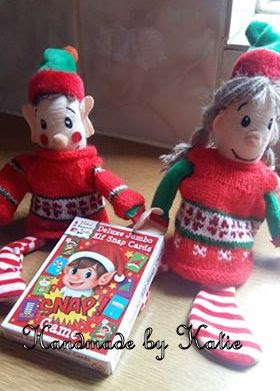 Due to all of the snow yesterday Ryan had a snow day today and was not at school, so the elves decided that it would be fun to play Hide and Seek with him.  The game lasted ages but he eventually found them hiding in the linen basket.

Once the game was over Ryan and his mum played Snap with a pack of giant Snap cards the elves bought back from the North Pole.  Everything went really well until Ryan's little sister decided to throw all of the cards in the air and they landed all over the room - she is only 15 months old and I guess he did not quite understand the rules of Snap!