Dressing up for Christmas

I am feeling very guilty about how long it has been since I was last here - I find it so hard to believe that I have not posted anything since 8 May, where does the time go?   Also, I must apologise if I have not visited your blog recently, I shall try to catch up soon.

However, I have not been taking it easy, I have, in fact, been wearing my little fingers out knitting.  I have several projects on the go at the moment and I have been working hard to get this one finished in time to share it with you throughout this month, it is my way of celebrating 'Christmas in July'!

Now, anyone who visits this space regularly will know that my nieces and nephews are all grown up and some even have families of their own.  I think that my sisters should be very proud of their children because they have all become wonderful, caring adults and I love them all of them dearly.  One of my nieces has an adorable little boy who has now been at school a few years - and he is doing very well.

Last Christmas my niece put their decorations up whilst he was at school.  When he came home he became very excited when he spotted two little elf ornaments she has put out.  You see, the other children at his school had been talking about their 'elves on a shelf' and he assumed that these were them.  They were, in fact, just ordinary ornaments but my niece played along by organising their nightly adventures.

A few nights later my niece arranged the 'boy' elf so it appeared that he was eating some of their Christmas treats.  In the morning her son became very upset when he saw the elf being naughty, in fact, he burst into tears.  After that every time one of the elves misbehaved he became very upset and my niece quickly realised that she would not be able to pose their elves in any mischievous tableaux.  As you my know, these elves have a reputation for getting into mischief and after this my niece found it more and more difficult to think of poses for their elves which put them in a good light.

Early in the New Year I had a call from my niece, she wanted to know whether I could knit a few outfits for her elves.  It was her idea that next Christmas the elves could be dressed differently each day, this would give them a different look each day.  I must admit that I found the idea of making 25 small dresses and 25 small jumpers more than a little daunting and I put the task off for a while, but at the end of April, I got out my patterns and started experimenting. 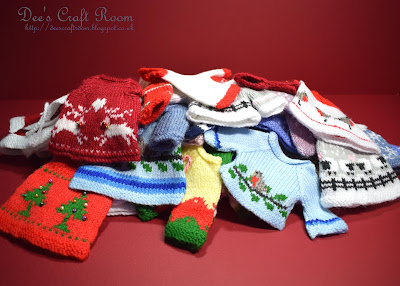 I was very keen to show you what I had been up to but I was worried that more than four dozen photos in one post was a little too much, even for me, but how should I set about sharing all of  my elf clothes?  It was then that the idea of Christmas in July occurred to me.  The plan I have come up with is to share a matching dress and sweater with you each day.  Most of the designs have a wintry theme but not all and, therefore, I suspect that anyone who does not read this post first will find themselves wondering why in subsequent posts I keep referring to Christmas in July.

Oh, I did had one more problem, I do not have the actual elves so how to display the clothes so you could see the details?  My solution was to use a little ornamental manikin which I have, it is very nearly the same size as the elves. 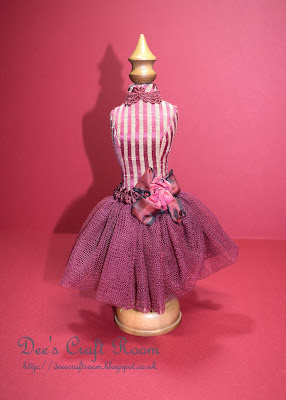 You may be interested to know that I have used Julie Williams basic  'Seasonal Dresses' and 'Seasonal Sweaters' patterns, some of the fair isle designs are by Julie Williams whilst others are by Suzymarie and, near the end, when I had run out of published winter themed patterns, there are even a couple designed by me!

These oiginal patterns were designed to fit the 'Little Cotton Rabbits' series but the elves are slightly larger, so I made their clothes in double knit instead of the recommended 4 ply.

If you have not come across the Little Cotton Rabbits and their friends I would urge you to pop across to Ravelry and take a look, they are all so sweet.

Hopefully I shall be back tomorrow with the first of my 'creations'. 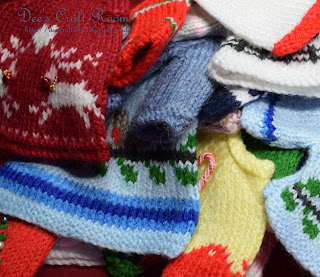