A pinch and a punch, it's the first of the month!

A few weeks ago I posted that I was not going to be blogging for a few weeks, I wanted to reassure my friends that there was nothing wrong, I was just going to be very busy for a while.  I now have a brief time, between finishing that project and starting all those Christmas ones that I really need to get on with, to tell you what I have been up to.

First, a very little background.  Regular visitors will know that I have a small niece who I often talk about.  This time last year her mum received a letter offering her a place at the local pre-school, we were quite surprized about this because she had only recently had her second birthday.  However, her mum was reassured that it was not an error and, after a conference, everyone involved agreed that my little niece was ready for pre-school and she joined the class at the start of the New Year ... and she loved it.

The pre-school does not have a compulsory uniform policy and no one in the class my niece joined wore the uniform.  After the summer break her class mates went up, but, because of her age, my little niece was kept back.  To her mum's horror all of the new class arrived on the first day wearing the uniform.  That afternoon she rushed to the shops but, unfortunately, the local shops had already sold out of the uniform in my nieces size.  Whilst her mum set about altering the dresses she had managed to find, she contacted me to asked if I could make her some red cardigans.

I was worried that the weather was already turning quite cold but I did not know how many cardigans she would need so I asked around and most people thought that five cardigans would be a good number - taking into account how messy three year olds tend to be and the problems of washing and drying woolies at this time of year.  Here are the first two. 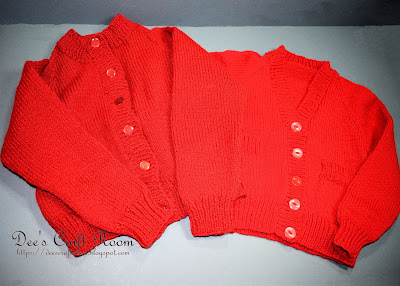 For quickness, I chose a plain patterned cardigan and made one of both the round necked design and the 'V' neck cardigan.  The pattern is a vintage Stylecraft one, number 4909. 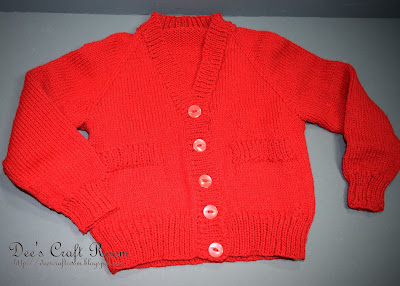 This pattern has an option for pockets, so I added pockets to the 'V' neck cardigan.  (When I gave these two cardigans to my niece, I suggested that she could keep her hankie in her pockets but she insisted that she was going to keep rocks in them!)  I finished this cardigan with five fish eye red buttons. 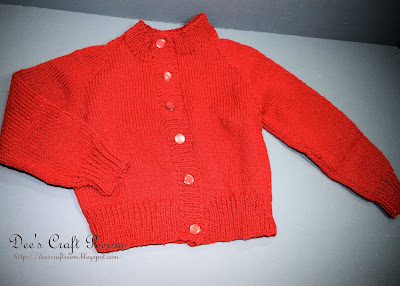 I kept the round necked cardigan plain - no rocks for this one.  Both cardigans were made in double knit and this one was finished with half a dozen shank buttons.

It's been quite a marathon making all of these red cardigans in just over a month, and not everything went exactly as planned.  But more about that another day.