Emm, thinking about it now, I probably should have published this post before Christmas but it is another one that slipped though the net.

I couple of years ago I made a light jar and liked the effect so much I decided to make some more this year.  This photograph really does not do them justice, they are far prettier than they look here, especially if you put the lights on a slow twinkle. 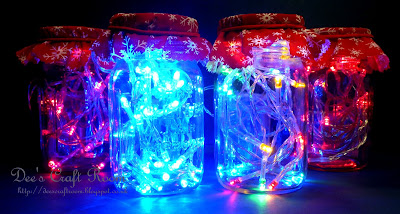 In the autumn I like to do some pickling for my family and a while ago I purchased some second hand Kilner jars from ebay for this purpose.  However, it was not a good purchase as I later discovered that they were only pennies more expensive new, and the lids of these jars were rusty and therefore unsuitable for food storage.

However, I did not want to waste the jars so I went on Pinterest to get some ideas of what else I might do with them.  This project caught my eye and they are so simple to make.  Back to ebay to buy battery operated macro lights and some suitable fabric.

My initial idea was to hide the batteries in the lid, but the battery pack was too large for that.  However, because of the design of the Kilner jar I was able to take the wire out through the top of the loose lid and the little fabric mop cap nicely hides everything.  I used red hairbands to hold the mop hats in place.

I think they would also look good outside on warm evenings ..... I would probably change the pattern on the fabric though!

Thank you for visiting today and I hope you have a wonderful weekend.