Do you even have a bright idea what doesn't work out exactly how you imagined it?  This project did not go how I thought but I thought I would nonetheless share it with you.

A few weeks ago, I saw some kits on the Hunkydory website which I thought might make fun cards for the young boys in the family, the series was called ‘Planes, Trains and Automobiles’.  Part of my problem was that I assumed that they were ‘cards’, I had imagined that you had to put them together in such a way that you could flatten them for posting and there would be a certain amount of self-assembly required by the recipient.   Wrong, the little steam train I decided to send to my nephew had to be fully assembled, it was difficult to do, my old eyes found the print size of the instructions was too small, I found it impossible to push the tabs through the slots and, when complete, there was nowhere to leave a message.   Oh, and there was no envelop or box to put the finished project in.  It does not really resemble a card, more a press out and assemble kit of a train but, in truth, that was my mistake. 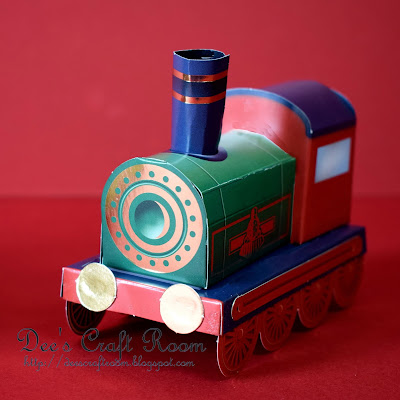 There was much to say in its favour, it was made of good quality card.  It was printed on both sides, even the pieces which you would not see once the kit was assembled, and it was foiled. 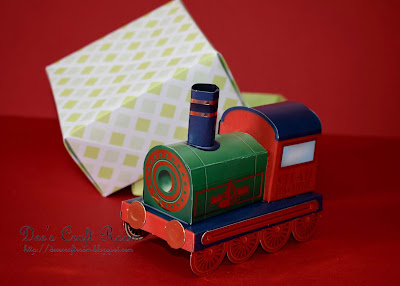 I decided to make a simple paper box to send it in, it was being hand delivered* so the box did not have to be too sturdy.  I also had to write my message to a Post-It and attach it to the underside of the train. 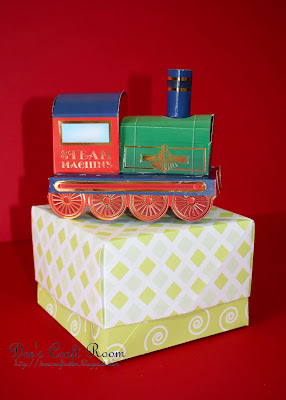 I am very tempted to pop another of the kits into my nephew's birthday present so he (or rather his mum) can experience the 'fun' of making one for himself!

* Now we are 'staying home' and self-isolating, I will have to leave his card and present on the doorstep, ring the bell and walk away.  The world has got very strange.
Posted by Dee's Craft Room at 10:00